Mansfield is a small town in the foothills of the Victorian Alps in the Australian state of Victoria. It is approximately 180 kilometres (110 mi) north-east of Melbourne by road. The population of Mansfield was 4,360 as at the 2011 census.

Mansfield is the seat of the Mansfield local government area. Mansfield was formerly heavily dependent on farming and logging, but is now a tourist-centre. It is the support town for the large Australia ski resort Mount Buller. It is associated with the high country tradition of alpine grazing, celebrated in the film made around Mansfield, near the now famous Craigs Hut, called The Man from Snowy River (based on a poem by Banjo Paterson). 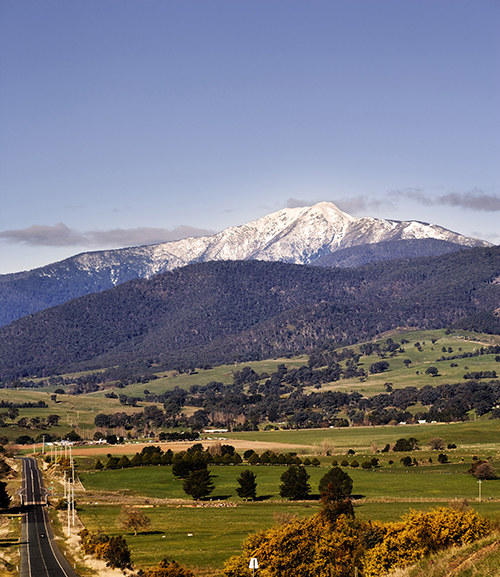 European history
Mansfield, originally known as Mount Battery, was at the boundary of a number of pastoral runs, and a township was surveyed in 1851 and named after

Mansfield in Nottinghamshire, England. Settlement came after the discovery of gold nearby and the Post Office opened on 1 January 1858.

The area round Mansfield named as Banbury was also the location of the novel The Far Country by Nevil Shute which featured logging on Mount Buller and previous forest fires, which having swept through Howqua obliterated almost all traces of a former settlement.

Mansfield is famous as part of the Ned Kelly Trail. Significant memorials include the Memorial to Police erected in the centre of the town's roundabout.

Mansfield Cemetery is the burial ground for police officers slain by Ned Kelly and his gang at Stringybark Creek.

John Pearson Rowe
Dr. John Pearson Rowe (1810–1878) was a physician and squatter who owned the 'Loyola Run' (also known as Mount Battery) near Mansfield. Reputed as the first Roman Catholic resident of the district, it is recorded that nearby Rochester was named after J. P. Rowe as he owned land on the Campaspe River. Rowe was a principal founder of the University of Melbourne. He fired a shot at a 14-year-old Ned Kelly accompanied by bushranger Harry Power in 1869. Rowe stood for the Upper House seat of the Murray District in 1859 and was defeated. In October 1878 Rowe supplied information to police Sergeant Kennedy on the whereabouts of Ned Kelly. Acting on Rowe's verified advice, Kennedy and his police party rode into the Wombat Ranges, where three of them were killed; and the Kelly Gang legend was born.

Recreation
Mansfield is very close to two large lakes, Lake Eildon and Lake Nillahcootie. During the summer these sites are popular waterskiing destinations.

The nearby Mount Buller and Mount Stirling offer attractions all year round. During winter they are visited for skiing, lifted and back country respectively. In the summer hiking and mountain biking are popular. Ski lifts operate year-round at Mount Buller allowing bikers to easily get to the top of downhill mountain biking runs.

The bushland around Mansfield is used for horse riding, trail biking and four wheel driving on extensive tracks throughout the region.

In past years, the "Mansfield Balloon Festival" celebrated hot air balloons, and drew crowds and enthusiasts from across the state. The balloon Festival hasn't been to Mansfield for several years.

Mansfield is also the home to the Mansfield Eagles football club, an Australian Rules team competing in the Goulburn Valley Football League.

Mansfield has a horse racing club, the Mansfield District Racing Club, which schedules two race meetings a year, including the Mansfield Cup meeting on 27 December).

Golfers play at the Mansfield golf course on Kidston Parade.

Selling and buying real estate can be daunting and choosing the right agent can be hard. Give us a call for a chat and some helpful advice regarding your property.